THERE ARE OVER 47 KNOWN SPECIES of termites in North America. Worldwide the figure stands at over 2,600. New discoveries are made all the time. Termites live in colonies within a highly structured caste system where each member performs a specific job. Members are grouped into three categories: workers, soldiers and reproductives. Reproductives (the queen and king) are responsible for producing members, soldiers are in charge of providing defense and workers go searching for food to feed the entire colony. Workers also build mud tubes for transportation which provides protection from predators and sun light. Colonies are either ground-based, living in the soil, or surface-based, existing in wood. 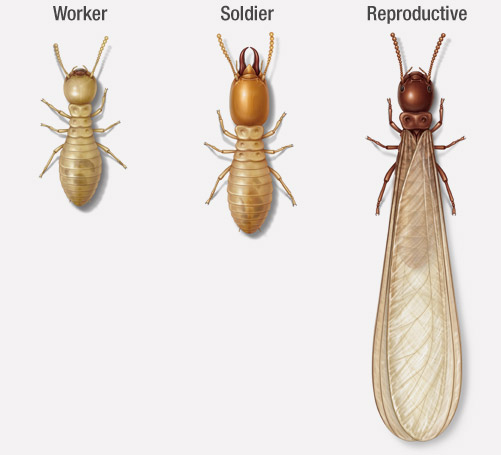 In the areas serviced by Lomax Termite Control, the termites that homeowners are most concerned about are subterranean, drywood, and dampwood.  About 90% of our calls are regarding subterranean termites, while less than 10% are about drywood termites, and less than 1% are about dampwood termites.  Because 99% of our calls involve subterranean and drywoods, we will focus on those two termite types below.  Wood boring powder-post beetles and carpenter ants can also cause wood destruction.

Drywood termites are most often seen in southern California but they can also be found along the coast; these termites wont be found in regions where the temperature drops below freezing.  Because drywood termites are difficult to detect and can cause significant damage, do-it-yourself treatment is not recommended.  Seek help from a professional termite control company like Lomax Termite if you think you may have a drywood termite infestation.  Drywood termites seem to be common in our area in places like Bodega Bay and Sebastopol.  Here are some basic facts about the drywood termite–

Subterranean termites are another species of the insect that can be found throughout the state.  These termites can tolerate cooler temperatures than the drywood termites so naturally they are found more often around the United States.  While still a species of termite, the subterranean is very different from the drywood termite (other than their love for wood).  The subterranean is the most destructive of any termite found in California.  Once again, please contact a professional like Lomax Termite when a termite problem is suspected.  Below is some information about the subterranean termite–

Dampwood termites get their name from the damp, sometimes decaying wood that they use to locate their colonies.  Dampwood termites do not nest in the soil.  They will invade wood that is on the ground, especially if it is decaying.  Dampwood termites are common along the Pacific coast.  Dampwood termites do not usually have contact with the soil.  They do not make tunnels like the subterranean termites.  Wood that dampwood termites have damaged usually looks clean and smooth inside.  They often eat across the grain, especially in wood that is decayed. The dampwood termites sometimes use their fecal pellets to seal the galleries where they live from the outside air.  If the wood is fairly dry, the fecal pellets may fall to the bottom of the gallery.  If the wood is very damp, the fecal pellets may stick to the sides of the termite galleries.  Because moisture is critical to these termites, solving moisture problems is an important part of dampwood termite control.  Plumbing problems, leaks in roof or siding, wood that is touching the ground, and even rainwater drainage are all examples of situations that may need to be addressed.  After the moisture conditions have been corrected, the damaged wood can be replaced. It is sometimes necessary to use treated wood.  Termiticide treatment in the wood is sometimes necessary. Because these treatments require special tools and equipment, it is advisable to call a termite control professional.

Moisture control combined with a wood preservative treatment such as Tim-bor should be the first line of defense against the aggressive pests known as powderpost beetles. In situations where moisture control cannot be implemented, removal of the infested wood along with replacing the wood with “insect and mold resistant wood” should be considered.  Spot or localized treatments of infested wood can and will sometimes resolve the infestation. Direct wood treatment using a product such as Tim-bor can be effective as long as the wood is not sealed.  One of the underlying problems with direct wood treatment is that NONE of the available powder post beetle control products will penetrate through stain, paint or varnish. In almost all situations where direct wood treatment is desired, unless the wood can be removed to expose an unfinished side, the wood must be sanded down to bare wood to allow the product to penetrate. Spraying any of these water based products on top of the finish will result in the wood insecticide or preservative beading up and rolling off just like water. The good news is that after sanding the wood and proper application of the pesticide has been made and the wood is dry, paint, stain or varnish can then be applied as desired.  Any type of localized treatment for powder post beetles should always be followed with regular inspections for new “exit” holes to determine if the infestation has spread or was never totally eliminated in the first place. In many cases, a regular regimen of powder post beetle inspection, wood replacement and wood treatment is necessary until all infested wood can be eliminated or treated within the structure.  Fumigation of homes and infested furniture and other wood products will kill powderpost beetles. It ’s important to note that fumigating an entire building can become quite expensive, costing thousands of dollars. The benefit of fumigation with fumigants such as “Vikane” are that the adult beetle and mature larvae forms of infestation can be totally eliminated with one treatment. However, be forewarned that the powderpost beetle eggs are not easily killed. This is because the powderpost beetle egg has a watery covering. Vikane does not penetrate water very well. With the use of “Vikane”, (the only currently available structural fumigant), the requirement is that 10 times the amount of Vikane gas has to be used to kill the eggs as it does to kill the adults and the mature larvae. This is called a “10X” rate of gas in the fumigation industry. To use 10 times the amount of gas to kill the eggs as it takes to kill the adults is very expensive and not always successful.